Cellulosic biofuels can benefit the environment if managed correctly 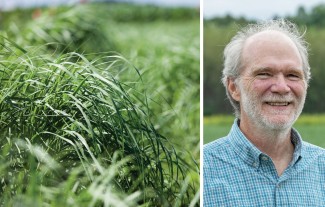 “The climate benefit of cellulosic biofuels is actually much greater than was originally thought,” says Phil Robertson, University Distinguished Professor of Ecosystem Science at Michigan State University (MSU) and lead author on the study. “But that benefit depends crucially on several different factors, all of which we need to understand to get right.”

Although not yet a market force, cellulosic biofuels are routinely factored into future climate mitigation scenarios because of their potential to both displace petroleum use and mitigate greenhouse gas emissions. Those benefits, however, are complicated by the need for vast amounts of land to produce cellulosic biofuels on a large scale.

A red wing blackbird guards its nest in a plot of prairie growing in the Great Lake Bioenergy Research Center's fields at the Arlington Agricultural Research Station in Arlington, WI. Matthew Wisniewski

“The sustainability question is largely about the impact of using millions of acres of U.S. land to grow biofuel crops,” Robertson says. “Can we do that without threatening global food security, diminishing biodiversity, or reducing groundwater supplies? How much more fertilizer would we use? What are the tradeoffs for real climate benefit, and are there synergies we can promote?”

Drawing from ten years of empirical research, Robertson and GLBRC colleagues from MSU, the University of Wisconsin–Madison, and the University of Maryland identify several emerging principles for managing the complex environmental tradeoffs of cellulosic biofuel.

First, the researchers show how growing native perennial species on marginal lands –land not used for food production because of low fertility or other reasons – avoids competition with food security, and provides the greatest potential for climate mitigation and biodiversity benefits.

Second, crop choice is key. Native perennial species offer superior environmental outcomes to annual crops, but no single crop appears to be ideal for all locations. In fact, in some  cases  mixed species crops provide superior benefits. Third, nitrogen fertilizer use should be avoided or minimized because of its global warming and other environmental impacts.

The climate benefit of cellulosic biofuels is actually much greater than was originally thought, but that benefit depends crucially on several different factors, all of which we need to understand to get right.

According to the researchers, these principles (as well as four more outlined in the paper) are enough to begin guiding sound policy decisions for producing sustainable biofuels. Looking forward, however, the team calls for more research on designing landscapes to provide the optimal suite of energy, climate, and environmental benefits. They say that understanding how best to integrate benefits and tradeoffs will be key to the future success of cellulosic biofuels.

“With biofuels, the stakes are high,” says Robertson. “But the returns are also high, and if we take key principles into account we can begin shaping the policies and practices that could help make cellulosic biofuels a triple win for the economy, the climate, and for environmental sustainability in general.”

GLBRC is one of three bioenergy research centers established in 2007 by the Biological and Environmental Research program in the U.S. Department of Energy’s (DOE) Office of Science. Its goal is to conduct transformational research and build the foundation of new cellulosic biofuels technology. For more information, visit www.glbrc.org or visit us on twitter @glbioenergy.