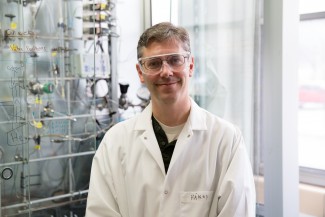 Harvey Spangler Professor George Huber (Chemical & Biological Engineering) and a team of collaborators developed a renewable way of producing a highly valuable commodity chemical from biomass. The development has the potential to reduce the use of petroleum in making plastics and improve the economics of cellulosic ethanol. James Runde

A team of chemical and biological engineers at the University of Wisconsin–Madison has found a way to produce from biomass a valuable compound used in plastic production that they estimate could lower the cost of ethanol produced from plant material by more than two dollars per gallon.

The development is the latest in an ongoing effort at UW–Madison to create commodity chemicals currently derived from petroleum out of biomass. These bio-derived chemicals could serve as high value co-products of the biofuels manufacturing process, improving the economics of cellulosic bio-refineries.

“This breakthrough shows how biomass-derived commodity chemicals can economically be used to replace petroleum-derived products,” says George Huber, a UW–Madison professor of chemical and biological engineering and affiliate of the Wisconsin Energy Institute. “It also shows how we might improve the rural economies in which biomass grows.”

In their paper published recently by the journal ChemSusChem, Huber and collaborators report a new chemical pathway used to produce 1,5-pentanediol, a plastic precursor primarily used to make polyurethanes and polyester plastics. The group’s highly efficient approach is six times cheaper than a previously reported method, and represents the first economically viable way of producing 1,5-pentanediol from biomass.

We’ve had companies asking more about this exciting way to economically produce a valuable chemical from sustainable sources.

“In our approach, we use the oxygen already inherent in the biomass to produce high value oxygenated commodity chemicals that can be used to make performance polymer materials like polyurethanes and polyesters,” says Huber.

Chemical and biological engineering graduate student Kevin Barnett takes a liquid sample from a continuous flow reactor in Engineering Hall in order to analyze its composition, including the presence of 1,5-pentanediol. James Runde

The study’s foundational discovery, its new pathway for chemical production, also provides fundamental chemistry that could be applicable to a wide cross-section of products. For instance, the same pathway could be used to produce two other plastic precursors — 1,4 butanediol and 1,6-hexanediol — currently derived from petroleum and which together represent an annual market of a more than $6 billion.

In the days ahead, the team will continue to refine their work, collecting the data needed to scale their process up to pilot plant testing. The Wisconsin Alumni Research Foundation (WARF) is in charge of licensing the technology.