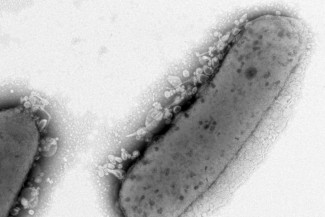 This image of a bacterial cell shows lipid droplets on the exterior of the cell wall. The lipids have escaped through a cell envelope that has been modified by UW–Madison and GLBRC researchers to increase lipid production. Donohue Lab

If you want to create sustainable biofuels from less and for less, you’ve got a range of options. And one of those options is to go microbial, enlisting the help of tiny but powerful bacteria in creating a range of renewable biofuels and chemicals.

In a recent study published in mBio, Great Lakes Bioenergy Research Center (GLBRC) assistant scientist Kim Lemmer and a team of collaborators focus on the microbes, reporting on a novel way to increase lipid production in bacteria. The finding could help make microbial lipids a viable alternative to petroleum-derived fuels and chemicals.

“As a fuel source, microbial lipids have a lot of potential,” says Lemmer. “You can generate them in the controlled setting of a lab and without affecting the food chain. But the challenge is figuring out how to generate enough lipids to make them usable on an industrial scale.”

To address this challenge, Lemmer and collaborators set out to gain a better understanding of the systems controlling lipid production in the bacterium Rhodobacter sphaeroides. First, they created and analyzed a library of more than 11,000 mutant strains of the bacteria in order to identify which strains had the highest levels of fatty acids. When they began studying the top ten, however, they did not see any of the gene disruptions one might expect for increased lipid production.

“At first, we looked at that list and it didn’t make any sense to us,” says Lemmer. “But when we started testing their characteristics, we were surprised to find that all these strains had increased sensitivity to compounds that act on the cell envelope.”

Collaborators at the U.S. Department of Energy’s Environmental Molecular Sciences Laboratory began examining the strains with a high-power microscope. There they found that eight out of the ten strains’ cell envelopes showed differences, whether in length or shape, from those of the original strain of R. sphaeroides.

We know that something novel is going on in these bacteria to give us oil production, but we don’t know how. Answering this question could help us to further improve the production of these and other valuable chemicals

Lemmer and team then turned to process engineering, growing one of the strains with the highest lipid production on a feeding schedule that encourages cells to grow to very high density. This method yielded a mutant strain with eight times more lipids than what’s observed in batch culture. Since they had coaxed the strain to contain up to 33 percent of its weight in fatty acids, they had effectively engineered R. sphaeroides to be “oleaginous,” or to accumulate a large portion of its mass as lipids.

The team also noticed that some of the bacteria’s oil is escaping the cell, a potentially welcome phenomenon given that researchers will eventually need to devise a means of extracting the oil for industrial use. But Lemmer says that future work will also focus on gaining a basic understanding of the mechanisms at work.

“We know that something novel is going on in these bacteria to give us oil production, but we don’t know how. Answering this question could help us to further improve the production of these and other valuable chemicals,” she says.

GLBRC is one of three bioenergy research centers established in 2007 by the Biological and Environmental Research program in the U.S. Department of Energy’s (DOE) Office of Science. GLBRC’s goal is to conduct transformational research and build the foundation of new cellulosic biofuels technology. For more information, visit www.glbrc.org or visit us on twitter @glbioenergy.