UW–Madison researchers explore the future of bioenergy crops in Wisconsin 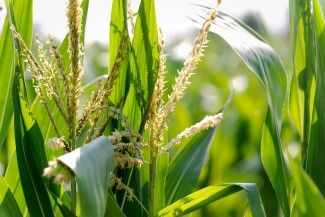 Corn grows on four million acres of Wisconsin farmland, and while it is an important source of food and fuel, UW–Madison researchers are investigating ways to limit the negative impacts corn can have on Wisconsin's ecosystems. Jeff Miller / UW-Madison

A culture of corn

In Wisconsin, as in many other parts of the Midwest, we grow a lot of corn – four million acres of it, in fact. That’s four million acres of corn generating $2 billion in economic benefits to the state. Since roughly a quarter of those corn crops are currently used for ethanol production, some of that Wisconsin corn is also finding its way into our gas tanks.

"Corn has incredible benefits for biofuel production,” says Claudio Gratton, professor of entomology at the University of Wisconsin–Madison. “You get a ton of biomass very quickly, it has a market, and we know how to harvest it. But there are costs associated with it, too, environmental costs.”

Corn is an annual crop that requires a lot of fertilizer to thrive. Since corn doesn’t fix roots in the soil year round, corn crops also increase soil erosion and cause runoff pollution. In Wisconsin and elsewhere, when rainfall or snowmelt carry topsoil downstream, phosphorus and nitrogen-rich manure flows into our waterways, endangering water quality and sometimes leading to poisonous blooms of blue-green algae.

It’s a problem without an easy solution. If farmers were simply to spread less fertilizer, they might see decreases in crop yield and profit. Introducing new or different crops is also not a simple fix, as many farmers rely on well-established corn and soybean markets with crop insurance for income.

Randy Jackson, a UW-Madison professor of agronomy who holds meetings with farmers and decision-makers as part of his research on sustainable agricultural systems, says current policies and prevailing market forces keep a tight hold on our current cropping landscape.

“To get started [in farming], you’re going to need a loan, and the bank is not likely to give you a loan unless you have a business plan based on corn and soybeans,” says Jackson. He also points out that some practices that exacerbate runoff pollution, such as planting row crops next to streams, are also the result of economic calculations. “It allows farmers to keep that land zoned agriculture, which means lower taxes.”

But what’s missing from our current approach to land management, Jackson argues, is a means of accounting for the social and environmental costs and benefits of various cropping systems. Jackson, Gratton, and other UW–Madison scientists are looking to measure those costs while exploring new and collaborative ways of making our cropping systems serve farmers as well as the people, plants, and animals that depend on healthy ecosystems.

Click through the different stages of the growing season to track how carbon, nitrogen, and phosphorus flow through each system. Click on the arrows to learn more about why each chemical flux occurs.

In his 2006 State of the Union address, President George W. Bush mentioned a bioenergy crop new to many. "We'll also fund additional research into cutting-edge methods of producing ethanol,” he said, “not just from corn but wood chips and stalks, or switchgrass.” A perennial grass native to most of North America, switchgrass has the potential to alleviate some of the runoff pollution associated with annual crops.

The year after President Bush’s speech, the U.S. Department of Energy established a bioenergy research center (BRC) program that seeks to fund the basic scientific research required to establish a more sustainable bioenergy industry. In 2007, when the DOE chose the University of Wisconsin-based Great Lakes Bioenergy Research Center (GLBRC) to receive $125 million in funding over five years, Jackson, Gratton, and other GLBRC colleagues began work on a central mission: to create ethanol from cellulosic, or non-edible, plant materials such as switchgrass, poplar, and corn stover. (The recent recipient of five more years of funding, GLBRC’s research will pivot from ethanol research to specialty biofuels in 2018).

A viable cellulosic bio-economy would provide farmers with a market incentive for planting perennial grasses on their land and has the potential to result in more sustainable farming. Planting crops such as switchgrass on key portions of the landscape could better retain soil, nitrogen, and phosphorus, and slow or eliminate their loss into the water bodies and the atmosphere.

Since cellulosic biofuels could also displace petroleum use, providing a viable alternative to the process of taking carbon buried long ago and putting it back into the atmosphere, they are also routinely factored into future climate mitigation scenarios.

“The really exciting thing about bioenergy for me is that we can use diverse perennial biomass,” says Jackson, “which offers us the opportunity to fix a lot of the problems on our current agricultural landscape – soil erosion, carbon and nutrient loss, and low levels of biodiversity. And if there’s a market for biomass, then farmers can make money growing perennial grasses and diverse prairie rather than asking farmers to take land out of production for conservation reasons.”

The case for marginal lands

And yet without a market for these bioenergy crops, farmers have little incentive to plant them. Cellulosic ethanol refineries are few and far between, and most process either wood chips or corn residue.

According to Jackson, Gratton, and other GLBRC researchers, targeting “marginal lands” is one way of beginning to incorporate perennial plants into our farmland. Jackson defines marginal lands as “land that isn’t great for growing crops because it’s exceedingly wet, exceedingly dry, exceedingly rocky, or exceedingly steep,” or “land where the income from your products doesn’t cover the cost of production.”

GLBRC studies have shown that growing native perennial species on marginal lands not only avoids competition with food production, but also provides the greatest potential for climate mitigation and biodiversity benefits. In their discussions with farmers on marginal land use, Jackson and his team also found that farmers are more interested in planting perennial crops in marginal areas that are not otherwise producing well for them.

And yet to facilitate a more large-scale adoption of marginal land perennialization, Jackson says there’s a need for “decision support tools,” or software that can help farmers make the kind of ecologically sound cropping choices that will also earn them money.

Marginal vs. Arable Land: Plant either corn or switchgrass on your marginal and arable tracts of land, and click through the different metrics to see the benefits and drawbacks of your decisions.

To that end, Gratton has developed a web-based decision support tool called SmartScape™. After entering in simple initial data points about your land, you receive a readout of how the land is performing across a range of environmental outcomes. From this you can see where “hot spots” are located on the landscape – these might be acreage near streams or in hilly sections – where planting perennial crops would have a disproportionately positive or negative effects on the ecosystem.

“There are some places where the land is super productive and it just doesn’t make sense to plant switchgrass,” says Gratton, “but there are other places on the land where farmers lose money growing corn. Moreover, we know that perennial grasses can be used as buffer strips to stop the flow of runoff and nutrients.”

“Decision support tools allow farmers, landowners, and policymakers to sit around a table and say, ‘if I paint the landscape like this and put switchgrass over here, What happens to carbon?, What happens to nitrogen?, What happens to my profit?, How is my neighbor affected?,’” says Jackson. “And if everyone is sitting around the table having this discussion about tradeoffs and synergies in what we call ecosystem services [e.g., methane consumption, pest suppression, or pollination], then it can help people arrive at what we would consider to be sustainable, enduring solutions.”

One of the advantages of the SmartScape™ model is that it can be scaled up to a regional level or scaled down to a small watershed. One complication of focusing on hot spots, however, is that they may not be uniformly distributed throughout a watershed. That means one farmer might have hot spots while his neighbor has none, a factor with the potential to complicate group decision-making. And yet, according to the researchers, early feedback from land managers at county and state agencies has been encouraging.

“We want stakeholders at the table understanding the problem, turning the dials on the models, and coming up with solutions as a group,” says Jackson. “Our hope is, and to some degree our experience has been, that the farmers themselves find ways to make farming financially competitive and beneficial for the environment.”

There may not be easy solutions in sustainable farming, but Jackson and Gratton’s approach is refreshing in its simplicity: Give farmers and stakeholders the tools to analyze their land, encourage watershed stakeholder meetings to discuss the findings, and enable each community to solve the problem on its own.

Changing Wisconsin’s landscapes, and the livelihoods that depend on them, won’t happen overnight, but for Jackson and Gratton, developing tools for conversation is both a step in the right direction and a way of enabling a diverse range of stakeholders to generate the solutions that will have a positive impact on the state.

“As we develop the science that helps us explain the costs and benefits of doing different kinds of agriculture, we need to be able to put it into the hands of people who are actually making decisions about how we grow things and where we grow them” says Gratton. “We want these tools to be accessible and straightforward, so that Wisconsin communities really can use research to decide for themselves how to move forward.”