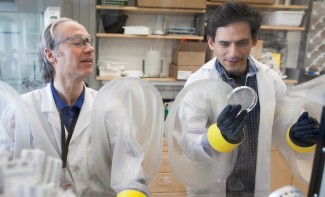 Microbial production of fuels and other useful chemicals offers renewable alternatives to products that are currently derived from fossil fuels. In a new study led by graduate student Julia Martien, researchers at the Great Lakes Bioenergy Research Center (GLBRC) investigated how a prolific ethanol-producing microbe, Zymomonas mobilis, regulates its synthesis of a broad class of natural products called isoprenoids, which include many industrial precursors and commodity chemicals.

The work identifies several enzymes that help the microbe overcome the rate-limiting steps in a key isoprenoid biosynthesis pathway known as the methyl erythritol-4-phosphate, or MEP, pathway. A better understanding of how Z. mobilis responds to oxygen-induced bottlenecks in the MEP pathway may identify promising targets for efforts to engineer microbial strains that produce higher levels of these valuable bioproducts.

Z. mobilis is very efficient at converting plant sugars into ethanol. But its metabolism could be readily harnessed for production of other organic compounds if carbon can be re-routed away from ethanol synthesis toward other product synthesis pathways.

The researchers found high levels of one type of naturally produced isoprenoid in the organism’s membranes, suggesting that the microbe is capable of driving carbon through the MEP isoprenoid biosynthesis pathway with high efficiency. That makes Z. mobilis a promising candidate for designing bacterial strains that transform plant material into specialty fuels and bioproducts.

Martien and her colleagues found that the bacterium was able to resolve this bottleneck almost completely within an hour through upregulation of a relatively small number of enzymes, including several involved in the formation and maintenance of the iron-sulfur cluster.

These results suggest that Z. mobilis has the capacity to shunt much more carbon through the MEP biosynthesis pathway than it does under normal anaerobic conditions, using a small number of regulatory changes. Enzymes used to maintain iron-sulfur cluster activity may be good targets for metabolic engineering to increase microbial production of isoprenoids, the researchers say.

Read the full paper in mSystems.