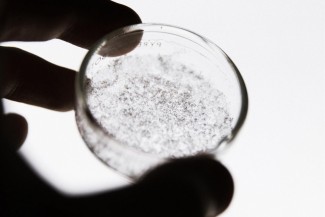 A renewable process for creating a plastic precursor called FDCA (shown above) could improve the economics of making plastic from biomass. James Runde

When John Wesley Hyatt patented the first industrial plastic in 1869, his intention was to create an alternative to the elephant tusk ivory used to make piano keys. But this early plastic also sparked a revolution in the way people thought about manufacturing – what if we weren’t limited to the materials nature had on offer?

Over a century later, plastics are an abundant part of our daily life. But these plastics are often derived from petroleum, contributing to our reliance on fossil fuels and driving harmful greenhouse gas emissions. To change that, Great Lakes Bioenergy Research Center (GLBRC) scientists are trying to take the pliable nature of plastic in another direction, developing new and renewable ways of creating plastics from biomass.

Using a plant-derived solvent called GVL (g-valerolactone), University of Wisconsin–Madison professor of chemical and biological engineering James Dumesic and his team have developed an economical and high-yielding way of producing furan dicarboxylic acid, or FDCA. One of twelve chemicals that the U.S. Department of Energy calls critical to forging a “green” chemical industry, FDCA is a necessary precursor to a renewable plastic called PEF (polyethylene furanoate) as well as to a number of polyesters and polyurethanes.

As the bio-based substitute for PET (polyethylene terephthalate), its widely used, petroleum-derived counterpart, PEF is rich in potential. PET currently has a market demand of close to 1.5 billion tons per year, and Coca-Cola, Ford Motors, H.J. Heinz, Nike and Procter & Gamble have all committed to developing a sustainably sourced, 100 percent plant-based PET for their bottles, packaging, apparel and footwear. PEF’s potential to break into that sizeable market, however, has thus far been hampered by the high cost of producing FDCA.

“Until now, FDCA has had a very low solubility in practically any solvent you make it in,” says Ali Hussain Motagamwala, a graduate student in chemical and biological engineering and co-author of the study. “You have to use a lot of solvent to get a small amount of FDCA, and you end up with high separation costs and undesirable waste products.”

Motagamwala and colleagues’ new process begins with fructose, which they convert in a two-step process to FDCA in a solvent system composed of one part GVL and one part water. The end result is a high yield of FDCA that easily separates from the solvent as a white powder upon cooling.

We think this is the streamlined and inexpensive approach to making FDCA that many people in the plastics industry have been waiting for.

“Using the GVL solvent solves most of the problems with the production of FDCA,” says Motagamwala. “Sugars and FDCA are both highly soluble in this solvent, you get high yields, and you can easily separate and recycle the solvent.”

Other features of the process contribute to its robust economics. The system doesn’t require costly mineral acids for catalysis, doesn’t produce waste salts, and you can separate out the FDCA crystals from the solvent by simply cooling the reaction system.

The team’s techno-economic analysis suggests that the process could currently produce FDCA at a minimum selling price of $1,490 per ton. With improvements, including lowering the cost of feedstock and reducing the reaction time, the price could reach $1,310 per ton, which would make their FDCA cost-competitive with some fossil fuel-derived plastic precursors.

“We think this is the streamlined and inexpensive approach to making FDCA that many people in the plastics industry have been waiting for,” says Dumesic. “Our hope is that this research opens the door even further to cost-competitive renewable plastics.”

For more information on the GVL technologies, contact licensing@warf.org. 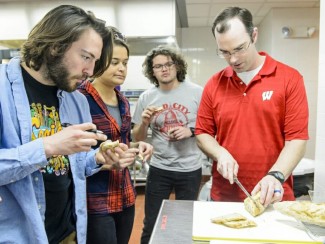 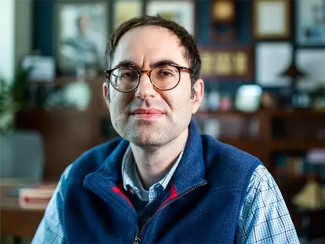 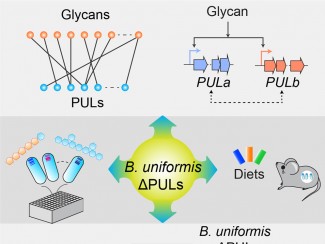