From micro to macro, UW–Madison’s expansion of the microgrid idea 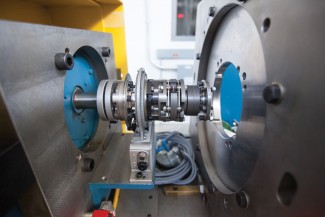 Researchers at the Wisconsin Energy Institute believe reorganizing the electrical grid to include "microgrids" would improve its resiliency and efficiency while minimizing its carbon footprint.

Ask microgrid pioneer Bob Lasseter about the origins of the microgrid and he cuts straight to the engineering, talking about a small but powerful generator he saw once in 1998 and how it got him thinking.

“Up to this point I was basically working on utility scale energy and here I was looking at this small thing that generates a lot of power,” says Lasseter, an emeritus professor of electrical and computer engineering at the University of Wisconsin–Madison. That small thing, of course, was both an engineering problem and an opportunity.

“If these machines were going to be competitive and we were going to have tens of thousands or a hundred thousand of them, how in the world was the grid going to handle that? That’s the germ of where the microgrid started out,” says Lasseter.

Adding new sources of locally produced energy is a challenge for the traditional utility grid, which relies on its central distribution of power to maintain a strict equilibrium in all seasons and at all times of the day between electricity supply and electricity demand.

If these machines were going to be competitive and we were going to have tens of thousands or a hundred thousand of them, how in the world was the grid going to handle that? That’s the germ of where the microgrid started out

While connecting distributed energy resources (DERs), such as wind and solar, continues to have its challenges, in the late 1990s the connection was even more difficult. DERs were required to shut down the instant that the grid’s voltage or frequency waivered outside their normal operating ranges, and utilities were beginning to create rules making it expensive and time-consuming for many DERs to connect to the grid.

Lasseter’s innovation, which he worked on with the support of the U.S. Department of Energy and the Consortium for Electric Reliability Technology Solutions (CERTS), was to create a small, self-contained electric power grid that connects and disconnects from the traditional grid seamlessly, or without disruption. This “microgrid,” as Lasseter dubbed it, was ideally suited to providing high quality, reliable power to smaller consumer bases such as hospitals, universities, or neighborhoods.

This marriage of the microgrid with the traditional grid is an efficient one. Move your energy source closer to you, and you lose less energy in distribution while creating other opportunities (such as combined heat and power) for the more efficient use of energy. Microgrids can more easily integrate clean energy resources into their energy supply. And microgrids also provide added reliability, functioning as a form of back-up power should the central grid experience an outage.

Though the idea of the microgrid was initially met with some skepticism, not everyone was dubious.

“Around 2004-2005, my papers started getting cited everywhere, something flipped it,” says Lasseter. “I have some that have 2,000 citations, which is absurd. It used to be that you were happy if you got ten.”

And in 2006, the U.S. Department of Energy, the California Energy Commission and the Lawrence Berkeley National Lab funded a microgrid testing facility, the first of its kind, which went a long way towards establishing the viability of the microgrid.

The microgrid as an enabler of innovation

Today, microgrids are up and running in countries all over the world. But basic research questions on microgrid design and functionality are now giving way to broader questions about scale and implementation.

Tom Jahns, Grainger Professor of Power Electronics and Electrical Machines at UW–Madison, is one of the engineers who is asking big questions about the future of the electric grid, as well as trying to move Lasseter’s original vision – of thousands or hundreds of thousands of microgrids – from idea to reality.

It’s not that the idea of distributed control is a new idea, it’s already being used very effectively in many industrial applications, but the scale of this is beyond what anybody’s ever done before.

Alongside Lasseter and other collaborators, Jahns is seeking to transform our current electricity infrastructure from a system that relies on fossil fuels and centrally distributed power to one that more fully and systemically integrates microgrids and other DER technology. Such a transformation, he argues, is necessary if we’re serious about producing a reliable system that also incorporates a large amount of clean energy produced in and for local markets.

“What we’re really talking about is a pretty dramatic change in the way that an electric grid would be arranged,” says Jahns. “One that encourages and rewards investors and building owners that invest in distributed energy resource equipment.”

To make that transformation possible, Jahns and collaborators are developing what they call a “dynamic distribution system” (DDS), a system in which many thousands of microgrids or other DERs would work as seamlessly on a large scale as the microgrid does on a small scale, becoming, as Jahns puts it, “good citizens” of a new and improved grid.

Microgrid researchers use a dynamometer (above) and other state of the art technology to simulate different load patterns and assess how a dynamic distribution system (DDS) would need to respond. Matt Wisniewski

DDS is essentially a new architecture for powering and controlling the grid. It proposes a new way of managing the grid’s complexity by organizing it into many functional clusters of energy-generating sources and energy-consuming loads. Each cluster would have the capability of controlling itself, but would also be in constant communication with a higher-level controller, working to smooth out the power flow upstream.

In re-working the nature of the relationship between DERs and utilities, DDS also seeks to tinker with the current economic model, making it possible for its functional clusters and microgrids to sell excess power back to the grid. The existence of these local markets would make investing in DERs increasingly attractive to third party investors and spur a faster transition to a cleaner, more distributed power grid.

If this all sounds complicated that’s because it is. As Jahns quips, “this work is not for the faint of heart.”

“It’s not that the idea of distributed control is a new idea, it’s already being used very effectively in many industrial applications,” says Jahns, “but the scale of this is beyond what anybody’s ever done before.”

The boundaries that bring new ideas

DDS may not be for the faint of heart. But it’s also not a job for those who want to do all their work in isolation. Fulfilling the promise of DDS will require expertise from an array of engineering specialties, as well as from economists, modelers, and industry and regulatory players.

While Jahns says he detects a new willingness on the part of utilities to collaborate with university researchers on research projects such as DDS, he also points to the need of finding and forming teams across academic disciplines and within the university community itself. Jahns wants to know who else is in the hallway or across campus, and how can they help.

“Increasingly, it’s the boundaries where we meet that bring new ideas,” he says.

One of the strengths of UW–Madison and the Wisconsin Energy Institute is the ability to convene different researchers and stakeholders in the interest of taking on large and complicated issues. For Jahns and his team, the future of the grid is just such an issue. Transforming the way we source and use energy, though complicated, is a challenge worth meeting.