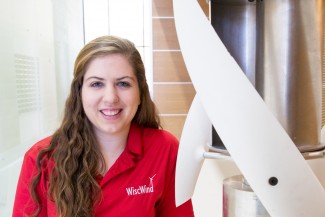 Emily Blase, a senior in mechanical engineering at the University of Wisconsin–Madison, is helping to lead the WiscWind team, as it heads into the 2017 DOE’s Collegiate Wind Competition Technical Challenge. Ben Golden

In the childhood home of Emily Blase, when the toaster refused to toast or the blender refused to blend, a shiny new replacement did not suddenly appear on the kitchen counter. Instead, Emily’s dad would round up her and her brother, grab a toolbox, and everyone got to work. 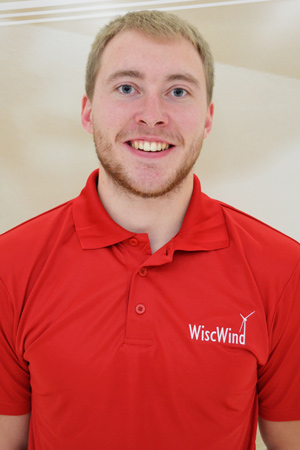 UW graduation date and major: May 2016, BS in Civil and Environmental Engineering (with a certificate in Engineering for Energy Sustainability)

Ian on his WiscWind experience: “The competition is incredibly helpful because it gives students insight into every step of the process of bringing a renewable energy system to market… In terms of career, it gives you something to talk to potential employers about. It shows initiative, the understanding of the systematic approaches to sustainable engineering, and, for me, it was an opportunity to show leadership skills and the ability to take on a major project.” 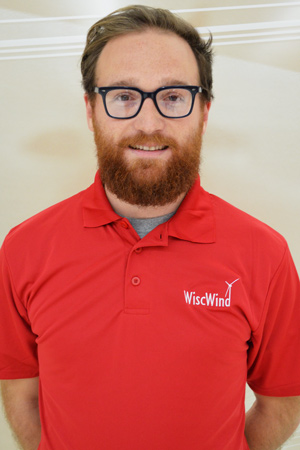 UW graduation date and major: May 2016, BS in Electrical Engineering

Walker on his WiscWind experience: “WiscWind helped me secure a job by giving me invaluable leadership and teamwork experience…the organizational and teamwork skills are critically important to the position that I am in currently, as all construction sites are basically one big team that must stay organized to keep the projects on schedule, under budget, and safe.”

A decade later you’ll still find Emily contemplating machinery, just on a much larger scale.  A senior in mechanical engineering at the University of Wisconsin–Madison, Blase heads up “WiscWind,” an interdisciplinary team of undergraduates who design and build wind turbines.

WiscWind got its footing at the start of the 2015-2016 school year, when its members began the long process of designing a functioning wind turbine and creating detailed plans for its marketing and deployment. At the end of the year, the team consisted of 15 students with majors ranging from civil, electrical, and mechanical engineering to business, political science, and economics.

“Last year’s WiscWind competition was a huge commitment but something I always looked forward to,” says Blase, who acted as the team’s outreach coordinator and a member of the mechanical sub-team. “In the thick of things, we were building and testing almost every day, either working in the shop, testing in the wind tunnel, or modeling in the computer lab.”

The team packed up their turbine, which they had specially designed to help provide more reliable cellular service in remote areas of India, and traveled last May to the competition in New Orleans. In the first year a team from UW–Madison entered the competition, they placed sixth overall and best of the five teams new to the event.

Scott Williams, WiscWind’s primary advisor and a research and education coordinator at WEI, says that the competition has provided an outstanding learning experience.

“It’s such a pleasure to support these students and to see how dedicated and collegial they are in working toward a common goal,” says Williams. “Building bridges across disciplines and preparing students to be clean energy leaders is an important element of WEI’s mission, and WiscWind aligns perfectly with that mission.”

As Blase prepares to lead WiscWind in designing and building a new wind turbine for this spring’s competition, she plans to draw on the benefits of working on a diverse team.

“WiscWind was the first interdisciplinary team I’ve worked on,” says Blase, “and I learned that people in different majors like engineering and business think differently and bring unique skills to the table.”

This spring Blase will also graduate and move into the workforce, where she believes her WiscWind experience will serve her well.

“I think that being a WiscWind team member is one of the most important things I’ve done in college,” says Blase. “Being part of a full-year design project isn’t something you typically get to do as an undergraduate. WiscWind has been a very different kind of opportunity and I’ll definitely be taking these new skills into my future life as an engineering professional.”