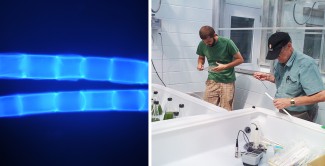 Members of Graham's team (pictured at right) optimize growth of macroalgae at UW–Madison's Biotron Laboratory. Pictured at left are strands of freshwater macroalgae from Madison's Lake Mendota. This alga is a feedstock super-producer (indicated by blue fluorescence) for which Graham's team has genomic data to aid development of industrial products.

For many of us, the thought of seaweed conjures up the slippery green strands we reluctantly wade through to reach the more inviting depths of our favorite summer swimming hole.

For algae expert Linda Graham, however, seaweed is “macroalgae”, a resource for improving aquatic health in oceans, rivers, and streams as well as the source of potentially valuable industrial products.

Graham, a botany professor at University of Wisconsin–Madison, leads a research team with two connected focus areas: developing innovative algal farming systems that use macroalgae to remove nitrogen and phosphorus from the effluent of wastewater treatment plants; and using genetic analysis to identify marketable “extractives”, products such as cellulose that can be easily extracted from macroalgae for a variety of industrial purposes.

“It’s the simultaneity of these two areas that is most important to my team’s work,” Graham says, “solving the all-too-pervasive problem of phosphorus and nitrogen in wastewater effluent and, at the same time, producing materials that are useful to humans.”

Traditional wastewater treatment plants are good at removing organic material from wastewater but they can’t remove all nutrients. And high concentrations of nitrogen and phosphorus, often the result of agricultural run-off, pose serious environmental problems as they fertilize sprawling blooms of microalgae in large bodies of water. Bacteria consume the available oxygen as they feed on the large algal mass, creating low- to no-oxygen “dead zones” that no longer support marine life.

“Wastewater from Madison ends up in the Rock River, which discharges into the Mississippi River and then flows into the Gulf of Mexico.” Graham explains. “That makes Madison residents partially responsible for the ‘dead zone’ in the Gulf of Mexico, which is currently more than six-thousand square miles in size.”

Graham’s team is working to efficiently and cost-effectively absorb nitrogen and phosphorus by installing different types of algal cultivation devices at the discharge points of wastewater treatment plants.

The idea that algae could be a source of renewable energy derives basically from the recognition that our modern day oil deposits as well as methane deposits originated from algae. So why wait 300 million years to generate more, when we can grow algae and use it to generate renewable fuels right here and now?

“The algae we work with are just like big sponges,” Graham says. “They soak up the nutrients and retain them for a long time. These guys are armor-plated, invulnerable to being eaten or broken down by microorganisms. They’re also very easy to harvest.”

Harvest in hand, the use of macroalgal genetic analysis to discover marketable extractives is an equally important part of the team’s algal research. “The sale of these extractives,” Graham says, “generates the income needed to subsidize the start-up, and maintain the costs, of algae-based wastewater remediation systems.”

Cellulose is one of those valuable extractives. A long chain of linked sugar molecules, cellulose is the primary component of plant cell walls and the basic structural element for many types of paper and cloth. Celluloses are used in making products as varied as batteries, pharmaceuticals, and clothing.

In recent years, Graham’s team has also focused on the biofuel industry, researching macroalgal celluloses that can be used as a feedstock for cultivating biofuel-producing microorganisms such as bacteria and yeast.

“The idea that algae could be a source of renewable energy derives basically from the recognition that our modern day oil deposits as well as methane deposits originated from algae,” Graham says. “So why wait 300 million years to generate more, when we can grow algae and use it to generate renewable fuels right here and now?”