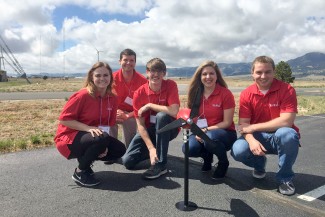 The competition, sponsored by the U.S. Department of Energy and held at the National Wind Technology Center, invited teams that participated in the 2016 Collegiate Wind Competition to build a new, small-scale wind turbine to be tested in a wind tunnel. In addition to wind tunnel testing, the team had to present their technical design in front of a panel of judges. The team’s turbine placed fifth out of the ten competing teams and first in the Bonus Siting Challenge, which asks teams to design a hypothetical wind farm based on various siting factors such as cost, power production, and local environmental impact.

This year’s technical challenge also introduced a brand new component: testing each turbine in yawed inflow, or in wind that continually changes directions. In response, WiscWind worked with students in UW–Madison’s Mechanical Engineering Senior Design course to redesign their model to feature a horizontal axis wind turbine with a passive yaw system to orient the turbine in the appropriate wind direction.

The WiscWind team tests their prototype in the wind tunnel at the Collegiate Wind Competition Technical Challenge in Boulder, Col. Dennis Schroeder / NREL

Scott Williams, WiscWind advisor, said the judges were impressed with many features of WiscWind’s wind turbine, including their yaw adaptations, electrical configuration, and unique carbon-fiber blade design. A few unexpected obstacles led to some late nights adjusting electrical circuits, but overall Williams was impressed with the camaraderie between teams and the enthusiasm for constructing a design for real world situations.

On April 11, WiscWind learned they are one of twelve teams invited to participate in the 2018 Collegiate Wind Competition, which will take place during the annual American Wind Energy Association WINDPOWER Conference and Exhibition in Chicago, Ill., from May 7-10, 2018.