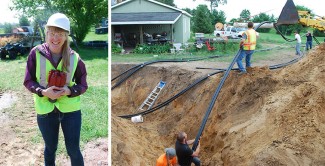 Eleanor Bloom (pictured left), graduate student of geological engineering at UW–Madison, holds a drill bit used to drill boreholes for a residential geothermal heating/cooling system. In a geothermal system, water runs through pipes (like those pictured right) from a ground source heat pump located in the house's basement. The water's thermal energy is then either sunk into the ground to cool the house or extracted from it for heating. Eleanor Bloom & James Tinjum

Rural Wisconsin is not the first place that comes to mind when someone mentions geothermal energy—a sputtering geyser in Iceland is a more likely association than a Badger State dairy farm.

But Eleanor Bloom, a graduate student in geological engineering at the University of Wisconsin–Madison, is hopeful that geothermal systems will soon be used more frequently to heat and cool Wisconsin homes.

“A small-scale geothermal system can be installed pretty much anywhere,” Bloom says. “In the winter, the system extracts energy from the almost constant ground temperature just 30 feet below the surface to heat your water and home. In the summer, you take the heat that’s in your house and sink it back into the ground.”

It’s also an exchange that puts climates like Wisconsin’s to advantage. “In a hot climate, the many days spent transferring heat from the home into the ground can reduce the system’s shelf life—but we don’t have that problem here in Wisconsin,” Bloom notes.

Homeowners in Madison may be interested in the system because they are already sustainability-minded, but in many other rural areas like Grand Marsh, saving money may be at least as important as environmental consciousness.

As a member of engineering professor James Tinjum’s research team, Bloom helped monitor a geothermal exchange system that was installed in December 2013 at a Grand Marsh residence about 75 miles north of Madison. The team’s goal is to evaluate the system’s energy efficiency and help reduce cost and feasibility obstacles to its more widespread use in the state.

The Grand Marsh installation involved drilling three 330-feet-deep boreholes in an area about the size of an average backyard and connecting the pipes within those boreholes to ground heat pumps in the home’s basement.

Tinjum’s team evaluates the system’s energy efficiency with a lifecycle assessment analysis. It accounts for the energy required to source and transport construction materials, to operate the pumps during the active use phase, and to eventually dispose of all physical waste. This analysis allows for a lifespan comparison of the system’s carbon emissions with those generated by heating and cooling the home with fossil fuels.

“Emissions during the use phase can be lowered by making the ground heat pump more efficient, or by increasing the percentage of renewable energy in the electricity grid,” Bloom says. The pump, for example, could be operated with wind energy to further reduce carbon emissions.

Bloom believes that geothermal heating and cooling systems are promising in both urban and rural settings.

“Homeowners in Madison may be interested in the system because they are already sustainability-minded,” Bloom says. “But in many other rural areas like Grand Marsh, saving money may be at least as important as environmental consciousness.”