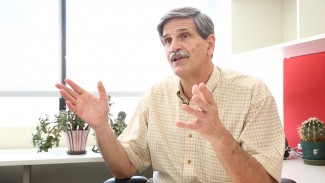 Back in 2005, Wisconsin Distinguished Professor of Engineering Physics Michael Corradini sent an email to then chancellor John Wiley to make a case for creating an energy institute at the University of Wisconsin–Madison. What the campus needed, he argued, was an energy meta-center that could help facilitate and expand the university’s clean energy research and education.

"And he [Wiley] answers me back early in the morning," Corradini recalls, half-smiling, "and types back, just one line, 'So what are you going to do about it?'"

To listen to Corradini now, as he prepares to retire this August from the College of Engineering and his position of director of the Wisconsin Energy Institute (WEI), is to get a sense of what it means to spend more than a decade coming up with an answer to that question.

In his office in the Engineering Research Building, Corradini looks to the ceiling as he traces the incremental route through which the WEI became reality, the paperwork and proposals, the meetings, and the chance conversations and connections.

"In typical Madison fashion – and I still think this is the way good things happen around here – it happened organically," Corradini says. "There was an interest, there was a need, and, over the years, a group of faculty put it all together."

Though Corradini was not alone in creating WEI as it exists today – starting in 2007, Great Lakes Bioenergy Research Center (GLBRC) director Tim Donohue also played a significant role – Corradini was the first moving the ball forward. He's been WEI's director since 2006 and was there to open the doors of its new building on University Avenue in 2013.

"Mike likes to credit achievements to the people around him," says Donohue, who worked extensively with Corradini when WEI was evolving into the administrative home for the GLBRC. "But make no mistake, he's been a major driver of WEI and we simply wouldn't be here today without his knowledge of the sector, his passion for engaging people from all corners of campus, the state, industry, and the world, and his decades of experience in energy issues."

"If one looks at energy programs around the world," Donohue adds, "they are often focused on physical sciences and engineering for historical and technical reasons. However, Mike saw the opportunity to plug biology into the energy grid of WEI and he embraced it in a way that now sets UW–Madison apart from its peers."

Corradini joined the UW–Madison faculty in 1981 after being recruited for several years by the chair of the nuclear engineering department. Though he'd been happy researching nuclear reactor safety at Sandia National Labs in Albuquerque, New Mexico, he grew convinced.

"I was impressed by the people," says Corradini. "It was the atmosphere more than anything that brought me."

In Wisconsin, Corradini has established himself as one of the nation's foremost experts in nuclear reactor safety. Over the course of his career, he has served as chair of the U.S. Nuclear Waste Technical Review Board, spent fifteen years as a member of the U.S. Department of Energy's Nuclear Energy Advisory Committee, and more than a decade on the Nuclear Regulatory Commission's Advisory Committee on Reactor Safeguards. Since 1991, he has also served as director of the Wisconsin Institute of Nuclear Systems.

In the last decade, with Corradini at the helm, WEI has provided a new focal point for energy research, education, and outreach on the UW–Madison campus.

"We've hired eleven new, really excellent faculty since 2009," Corradini says. "To me that's a really big achievement. There's an old adage, which I firmly believe in. How do you create success at a university? You hire absolutely excellent people, figure out what they need, give it to them, and then get out of the way."

Corradini also says that WEI has helped expand new areas of research interest on campus, especially in the areas of high value chemical products and electricity systems. In 2015, WEI increased its research funding by 16 percent, an increase Corradini says shows WEI is successfully securing funding in an extremely competitive environment.

For Corradini, though, it's not just about the research.

People forget about outreach because it’s not big money but I think it’s very important. From the beginning we did an enormous amount of public talks about energy and its importance in society. And over the years we’ve also focused more on engaging industry.

"My bias," says Corradini, "since we’re at a university, is that everything ought to have an education thrust in some way, shape, or form."

Early on in Corradini’s tenure, WEI developed an undergraduate certificate, the Certificate in Engineering for Energy Sustainability, which now graduates about 25 students each year. And he also points to WEI’s outreach as a significant achievement.

"People forget about outreach because it’s not big money but I think it’s very important," he says. "From the beginning we did an enormous amount of public talks about energy and its importance in society. And over the years we’ve also focused more on engaging industry."

Since 2014, Corradini has also served as chair of the Midwest Energy Research Consortium (M-WERC), a Milwaukee-based consortium of researchers and industry representatives focused on driving the Midwest’s energy, power, and control industry. The consortium’s impact is local and far from trivial; Wisconsin’s EPC sector includes more than 900 companies from nearly every county in the state, employs 100,000 people, and generates more than $38 billion in economic activity.

Looking back on Corradini’s career, another old adage comes to mind: "If you want something done, ask a busy person." Which is also, incidentally, what makes it hard to square the word "retirement" with the person. When asked specifically about his plans for retirement, Corradini responded with characteristic understatement. "I have a few other things to do," he said. Retiring, in the most conventional sense of that word, is probably not one of them.