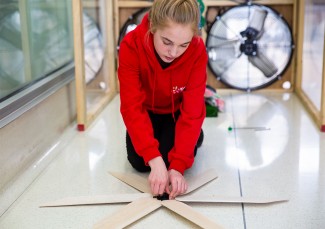 A student adjusts turbine blades in the wind tunnel at the Wisconsin Energy Institute. Kevin Chukel

On Saturday, March 30, elementary and middle school students from around the state gathered at the Wisconsin Energy Institute (WEI) for the 2019 KidWind Challenge. The event is a competition in which teams from different schools construct their own model wind turbines and compete to see who can produce the most energy. Teams came from as far north as New Auburn, as far west as Darlington, and as far east as Burlington.

In a classroom, teams made final adjustments to their turbines before testing them in a wind tunnel in the lobby while parents and judges looked on. Timed instant challenges, in which they practiced “lockout/tagout” safety procedures for working with electrical equipment, rounded out the event. Their designs and overall knowledge of wind energy were evaluated, with the two winning teams advancing to the national contest in Houston at the end of May.

KidWind students and families also had the opportunity to hear presentations by WiscWind, a UW–Madison student organization which participates in the U.S. Department of Energy’s collegiate wind competition, and Lakeshore Technical College’s wind turbine technician program. Both groups discussed opportunities for young people interested in careers in wind energy.

“It’s a great honor for WEI to host this event in partnership with KidWind and inspire young people in Wisconsin to get involved in renewable energy,” said Scott Williams, WEI’s Research and Education Coordinator.

Coaches and parents interviewed agreed that KidWind is a great way for kids to develop STEM skill sets in a fun, competitive environment.

Jamie Komar and Elisa Brown have children in the Randall Consolidated School District that participate in KidWind. Komar and Brown agreed that KidWind is a good way for kids to be exposed to potential applications of the science and math they learn in school. They also noted how excited their children were to design and optimize turbines.

“It was fun listening to the interest that the kids have,” Brown said. “Our two girls...spent four or five hours of their own time over Spring Break working on the project because they were enjoying it.”

The kids, meanwhile, were focused on winning.

“We’re changing the pitch angle from 35 to 40 degrees,” said Pete, age 10, “because we thought it would increase the joules.” Joules are a standard unit for measuring energy, and the number produced by the turbine is a key metric for the judges.

Ashley Wick and Aubrey McCarthy are middle school students from Darlington. By participating they’ve learned about airfoils, gear ratios, safety when working with wires, and much more. But the highlight, according to McCarthy, has been “making the blades, messing up, and laughing about it.”

Educating for a sustainable future

Dick Anderson, a retired teacher from Darlington who leads the KidWind project in Wisconsin, said KidWind was a “no brainer” for an educator interested in renewable energy.

“It is the future, there’s no doubt about it,” Anderson said. “And the more you know about it the more you can use it...there’s a ton of jobs involved with wind, and from an educational standpoint it covers all the STEM bases.”

Anderson has had a wind turbine on his property in Darlington since 2000, a time when relatively few people thought utility-scale wind energy would become practical. Since then, he has seen 49 two-megawatt turbines rise on the landscape around Darlington, enough to power tens of thousands of homes.

Witnessing the development inspired Anderson to investigate opportunities for teaching students about wind energy. Darlington students participated in KidWind for the first time last year, and placed in the top five at the 2018 national competition in Chicago. Anderson says the students have impressed since the beginning. He recalled one case in which a student researched wind turbine optimization on her own outside of class, and came back the next day with a proposal to add Gurney flaps—small blade add-ons which increase efficiency by 3-5%—to the Darlington team’s model.

“That’s the cool part,” Anderson said. “The role of really effective teaching is to get students interested so that you can say ‘what do you think?’ and let them go.