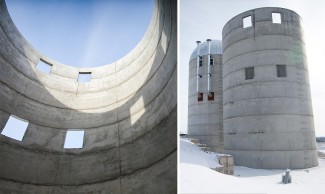 In spring of 2015, a Wisconsin Energy Institute (WEI) seed grant will help kick off an exciting new construction project at the Tantalus Lab in Stoughton, Wis., an off-campus research site owned by the University of Wisconsin–Madison.

Mark Anderson, an engineering physics research professor, will oversee the building of a test facility that will improve the design, and potentially lower the cost, of future solar power plants. Alstom Power, a global energy company that has made a significant commitment to the solar power market, will donate the majority of the test facility’s building components.

“Based on some preliminary work we did for Alstom, UW–Madison became the ideal place for them to site this test facility,” Anderson says. “Once it’s up and running, I think it will attract a lot of interest from the solar industry.”

Anderson’s overall research goal is to improve the efficiency with which we generate power from a variety of sources. One way of doing that is to increase the power plant operating temperature, the point at which thermal energy is converted into electrical energy. Whether a plant burns coal, natural gas, a nuclear fuel, or takes advantage of the sun’s thermal energy, the higher its operating temperature, the more efficient the facility, which ultimately lowers the cost of the generated electricity.

According to Anderson, power plant operating temperatures did not go much beyond 350°C about ten years ago, across the entire range of energy sources. Now, some newer coal-fired power plants can go up to 600°C. To push for even higher temperatures, however, technological advances first need to be tested at a smaller scale.

Solar power plants have yet to make the leap from about 400°C to 600°C. They reach those temperatures by focusing, or concentrating, the sun’s energy with solar collectors; this explains the name concentrating solar power (CSP) plant. The highly concentrated thermal energy is first captured by a heat transfer fluid (HTF) and then transferred to a working fluid in the plant’s heat exchanger to generate electricity. Importantly, some of the thermal energy can be stored for later use.

The new facility that will soon break ground at UW–Madison’s Tantalus site will allow Anderson to evaluate molten (liquid) salt as an advanced high-temperature HTF. It is cheaper and has better thermal properties than the oil-based HTFs used in most first-generation CSP plants.

“With our high-temperature molten salt test loop, we want to fully understand the thermal hydraulic aspects of heating the salt to 600°C,” Anderson says. This involves finding the optimum mixture of nitrate salts that can convert the highest possible amount of thermal energy per volume into electricity, while remaining robust under a broad temperature range.

“Our molten salt test loop will simulate solar energy with an electrical simulated solar receiver. By not using real solar energy, we can replace the fluctuation of natural sunshine with a very controlled experiment,” Anderson explains. The data generated by this experiment will then inform the design of a future large-scale CSP plant that Alstom Power plans to build.

According to Anderson, WEI seed grant funds will be used to buy a transformer and other equipment to provide about 1 MW of electrical energy to operate the pumps and the simulated solar receiver, with Alstom Power donating most of the other building components.

“We expect construction to begin in the first half of 2015, and hope to have the facility ready for operation in early 2016. Alstom is looking for at least two years of extensive testing on the loop, but we will be able to operate it for much longer,” Anderson says.

Anderson expects the loop to generate significant paybacks on WEI’s initial investment since a close working relationship with a major energy construction company could help him pursue large-scale funding opportunities from the Department of Energy (DOE) and other agencies.

The DOE’s SunShot Initiative, for example, is committed to reducing the cost of solar-generated electricity from $0.13 per kilowatt-hour in 2013 to $0.06 by 2020. This would make solar energy cost-competitive with fossil fuels, allowing it to meet an estimated 27 percent of U.S. electricity needs by 2050. Anderson’s next goal — to test even higher temperature HTFs, such as chlorides, carbonates or liquid metals — is in line with that mission.

“Ultimately, we want to reach temperatures of 750°C or higher, but that is pushing the limits of current materials, “Anderson says. “For now, our test loop will help the solar industry get their feet wet with the jump to 600°C, before increasing the temperatures even further.”