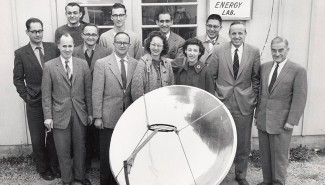 In 1954, a highly accomplished 65-year-old chemistry professor named Farrington Daniels “sought solace in the sun, the poor man’s atomic power plant” – according, that is, to his wife Olive. Her 1978 biography, Farrington Daniels: Chemist and Prophet of the Solar Age, paints a vivid picture of Daniels’ vision of spreading solar energy research from Madison to the world.

At a time when few, if any, voiced concerns about meeting future energy demands with fossil fuels, this vision was unusual indeed.

Farrington Daniels constructs solar stills as part of the work with the Solar Energy Lab. Photo courtesy of UW-Madison Archives

Unusual, but not unfunded. With money from the Rockefeller Foundation, Daniels and John Duffie, a 29-year-old chemical engineering professor, set up shop in what Olive called a “20x40 foot grey wooden shack, which had formerly been the primate laboratory, or monkey house.”

Naming their new building UW-Madison’s Solar Energy Lab (SEL), Daniels and Duffie began to study how to harvest energy from the sun to power simple home appliances. The lab was one of the first of its kind in the world.

Since fossil fuels were cheap and abundant in the 1950s, there was virtually zero interest in funding research on the domestic use of solar energy. The Rockefeller Foundation’s mandate was to focus instead on bringing solar energy to developing countries with limited or non-existing access to electricity.

Designing applications to help people accomplish basic tasks such as cooking, refrigeration, and water heating was a perfect fit for Daniels, a man of many ideas and strong humanitarian feelings. These feelings were perhaps amplified by a sense of guilt about his earlier professional involvement in the Manhattan Project, which had developed the atomic bomb.

During SEL’s first decade, Daniels traveled to Mexico, hoping to establish solar cookers as a substitute for cooking with wood, charcoal, or cow dung; to the South Pacific islands of Tahiti and Rangaroa, and to Ecuador’s Galapagos Islands, hoping to supply drinking water with simple solar stills that could be built from local materials; and to the sandy beach of the Daniels’ cabin in Door County, where he tested experimental prototypes of a solar refrigerator, a solar air conditioner, and a solar engine-driven water pump.

Daniels’ efforts in the developing world had mixed results, according to Sanford Klein, Ouweneel Bascom Professor of Mechanical Engineering and SEL’s current director. One problem with the solar cookers was their inability to store energy for later use.

“People did not want to decide when to eat based on when the sun was shining,” Klein explained.

However, where one product failed, another endured: solar water heaters were considered the most commercially successful application of solar energy in the mid-1960s. While not invented at SEL, Daniels and Duffie helped promote these water heaters all around the world.

In an oral history interview recorded in 1976, Duffie summarized SEL’s biggest early accomplishments. “We built the springboard from which the lab’s later successes were launched, and attracted first-class students and young faculty.” Those young faculty included William Beckman, a University of Michigan mechanical engineering Ph.D. After joining SEL in 1963, he would become its second director twenty-five years later.

Daniels’ success as an international spokesperson for solar energy was instrumental in founding in 1955 what is now the thriving International Solar Energy Society (ISES). And thanks to Duffie’s early efforts, Madison became one of only twenty-six cities in the country for which detailed solar radiation data were collected manually, long before computers and satellites greatly simplified the task.

“During SEL’s first decade, the ratio of investments in solar versus nuclear energy was about five minutes to one year,” Duffie noted.

Going from bad to worse, funding for SEL was virtually non-existent from 1965 to 1971. Reasons included low domestic energy prices, a waning interest in taking solar energy to developing countries, and a strong constituency for the peacetime use of nuclear energy.

Illustrating his strong commitment to solar energy, in the 1960s Daniels used some of his own money to see ISES through its financially most dismal period. Both the society and SEL considered, and rejected, proposals to terminate their respective activities during this difficult time.

However, SEL’s endurance through this dry funding period would soon pay off. The early 1970s were an era of tremendous change for the lab, as well as the entire country: the 1973 oil crisis drove home the message that fossil fuels would not always be abundant and readily available to millions of American citizens.

In response to the crisis, the National Science Foundation and then the Energy Research and Development Administration (ERDA) – the predecessor of today’s Department of Energy (DOE) – created new funding opportunities for solar energy research. According to Beckman, ERDA and the DOE provided the majority of SEL funding for the next forty years.

Daniels passed away in 1972, just a year before Klein’s arrival in Madison officially ended SEL’s “BC” (before computers) era. Pursuing his doctorate in chemical engineering under Duffie and Beckman, Klein’s computational research “earned him an international reputation well before his Ph.D. thesis was officially published,” Duffie noted with pride.

The TRaNsient SYStems (TRNSYS) software, the most enduring outcome of Klein’s dissertation, would also lay the foundation for SEL’s worldwide reputation. Though originally developed to model the performance of solar energy applications, the researchers soon realized that TRNSYS was the first computerized tool for evaluating just about any type of energy system.

The professorial staff of the Solar Energy Laboratory in 1984 included (from left to right) chemical engineer John A. Duffie and mechanical engineers Sanford A. Klein, William A. Beckman, and John W. Mitchell. Photo courtesy of UW-Madison College of Engineering

“TRNSYS allows its user to put together different parts of a system like a tinker-toy set, solve all mathematical equations, and take care of all the bookkeeping tasks that are needed to evaluate how well the system meets its goal. It replaced experiments that would have taken years to complete,” Klein said.

By the time Beckman became SEL’s second director in 1988, the software had already become the worldwide standard tool for evaluating system performance in the energy sector.

In addition to its international success, Beckman said that “TRNSYS immediately became an invaluable educational tool for UW-Madison’s engineering students.”

To this day, students continue to thoroughly test, tweak, and expand the software’s functionality, and document their newly contributed ideas in master’s and doctoral theses.

In 1983, SEL became the first lab in the world to receive the Weeks Award from ISES in recognition of TRNSYS and other pioneering research. TRNSYS also became a springboard for start-up companies such as the energy-consulting firm Thermal Energy System Specialists Inc. (TESS) in Madison, which was founded in 1994 by two of Beckman and Klein’s graduate students.

Sixty years ago, Daniels, “the untiring prophet of the solar age,” called the sun “the poor man’s atomic power plant.” One could argue that SEL has come full circle since then.

“Nuclear and solar researchers, who used to be enemies, now work together,” Klein says, referring to his DOE-funded collaboration with UW-Madison engineering and nuclear physics professor Mark Anderson.

Indeed, nuclear and solar power plants differ only in the source of the heat they use as an energy storage medium; how that heat is converted to electricity is very similar, which is why Klein and Anderson have now joined forces in designing modern concentrating solar power (CSP) plants.

Schematic of a CSP plant. Photo courtesy of the Department of Energy

A CSP plant uses a system of many mirrors to concentrate, or focus, the sun’s energy on a heat transfer fluid. This working fluid, which may be oil or molten salt, is heated to extremely high temperatures. When electricity is needed, the working fluid transfers thermal energy to the power block, where heated water spins a steam turbine generator.

Since the energy contained in the hot fluid can be stored for later use when the sun may no longer shine, this creates a very flexible system. In addition, the generation of electricity by conversion of solar thermal energy is about twice as efficient as that of photovoltaic cells, the workhorse inside the familiar rooftop solar panels.

These days, Klein and Anderson are working on a new generation of CSP plants that would use so-called supercritical carbon dioxide (S-CO2) as a working fluid. Thanks to its much greater heat transfer efficiency, future CSP plants would not only produce electricity more efficiently, but would also take up much less space.

SEL is also developing new cooling methods for CSP plants. Currently, a tremendous amount of water is used to cool down the turbine-turning steam after it is done producing electricity. This is a problem for CSP plants in desert areas rich in sunlight, but poor in water resources.

From solar cooker prototypes to supercritical carbon dioxide, SEL has come a long way in the sixty years since Daniels began tinkering in a smelly grey shack that used to house monkeys. But while the technology has changed dramatically, the thermodynamic principles of solar energy have not. And SEL is just as committed to teaching its students how to apply them to the challenge of harvesting useable energy from the sun as it was in 1954.

Klein does not anticipate a change in this mission anytime soon.

Read more about the 60th anniversary of the SEL