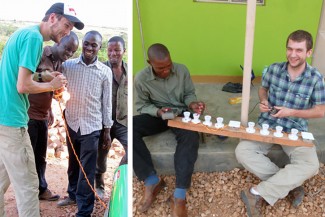 In 2009, the International Energy Agency estimated that 20 percent of the world’s population, or approximately 1.3 billion people, were without access to electricity. By 2030, they estimate that with aggressive financial and policy support that number could drop to one billion worldwide.

Lack of access to energy, however, is not equally distributed around the globe. In the United States access to electricity has become nearly ubiquitous as robust energy infrastructure and utility support have been in place for decades. And yet in Uganda, the World Bank estimates that only 8.5 percent of the country’s 35 million people have access to electricity. And in these developing countries, where widespread electrification systems are lacking, unreliable or non-existent, people are forced to rely on more traditional energy sources like kerosene, wood, charcoal, residues from farming and even animal waste.

Faced with few options, people often rely on sources of energy that are immediate, near to their homes and cheap. However, the use of these quick energy resources sometimes has a detrimental impact on their health and the health of the environment by contributing to pollution and deforestation.

A team of researchers from the University of Wisconsin–Madison hopes to curb reliance on traditional energy sources that harm human health and the environment by developing a reliable, safe alternative that also provides that provides additional benefits such as producing fertilizer for nearby farmers. Their research combines two areas of growing expertise on campus: anaerobic biodigesters and electrical power systems.

The project, “Portable Electrification using Biogas Systems,” is a collaborative effort between UW–Madison College of Engineering graduate students Calvin Cherry and Michael Rios, UW-Madison College of Engineering Professor Giri Venkataramanan, and graduate students Aleia McCord and Sarah Stefanos from the Nelson Institute for Environmental Studies. The work is funded in part by a Wisconsin Energy Institute seed grant and complements the research that McCord and Stefanos have been doing in Uganda since 2011.

While working to develop their organic fertilizer and compressed natural gas company, W2E Uganda, Ltd., McCord and Stefanos have continued to pursue socially and environmentally sustainable solutions in Uganda. With funding from a Baldwin Wisconsin Idea Grant, the pair has connected Makerere University students with their UW–Madison counterparts to develop a biogas system at Lweza Primary School. By finding additional ways to utilize the products of those biodigesters, like biogas for electricity, Cherry has helped to ensure that the micro-scale systems are being used to their fullest potential. The researchers hope this will increase their viability in communities and encourage increased adoption throughout Uganda.

“What’s exciting about this project from an energy stand point is that it is building on a system that already exists and utilizing a byproduct that was underused,” Cherry says. “We’re essentially just piggybacking, but creating a big improvement to their standard of living.”

Cherry's reearch is happening at a micro-scale biodigester system developed in Mpigi by Vianney Tumwesige, founder and director of Green Heat—a provider of biodigester solutions throughout Uganda. McCord credits Tumwesige with being Uganda’s premier biodigester expert as he and his company have installed more than 40 micro-scale systems to date. The research is taking place at a microsystem that consists of an anaerobic digestion chamber situated partially beneath an outhouse. The digester uses microbes in the absence of oxygen to digest waste material and create usable products like fertilizer for agriculture and biogas with many uses.

“You have to think of these biogas systems like they are a giant, cement cow,” McCord says. “And like a cow they need to have food and water. They need to be taken care of when they get a bit gassy, and, ultimately, you have to figure out what to do with the materials that come out the other end.”

The major limitations of these micro biodigesters and other systems like it are limited water resources and lack of proximity to human developments where the end products can actually be used. Because there is no existing infrastructure to gather fresh water or easily transport the biogas and liquid effluents long distances, the researchers have to find creative ways to encourage their use.

I didn’t want to go to Uganda with a rigid idea of ‘this is what they need and this is how we are going to do it with what we have.’ Because, those types of solutions don’t really work anywhere in the world.

Working with her UW–Madison faculty advisor Dr. Becky Larson, McCord collaborated on the development of a low-cost solid-liquid separation system that would allow most of the liquid already in the biodigester systems to be reused.

“We found that end users were loathe to mix their fresh water with feces or other waste materials. And you really can’t blame them when you consider how labor and time intensive it can be to gather,” McCord says. “But this separation process, by and large, makes the systems significantly more self-contained and sustainable.”

Cherry is exploring “portable” additions to this existing system that can utilize the biogas and create electricity for community members in Uganda to light their homes or charge their cellphones even though they don’t live near to the biodigester. This addition has the added benefit of creating an extra value stream for the biodigester owners.

The new system would bring a cheap generator to the digester site where biogas can be used to power the generator and in turn charge portable battery boxes. Once charged, the batteries would be transported to a local market and rented by community members. Another benefit of this system is that food waste from the market can be transported to the digester site, so transportation of the batteries to and from the community wouldn’t require any additional labor.

“I didn’t want to go to Uganda with a rigid idea of ‘this is what they need and this is how we are going to do it with what we have.’ Because, those types of solutions don’t really work anywhere in the world,” Cherry says. “I think taking a holistic approach and finding ways to build onto existing systems will increase the widespread adoption of these systems, creating greater access to electricity and mitigating some of the public health concerns of the more traditional energy sources.”