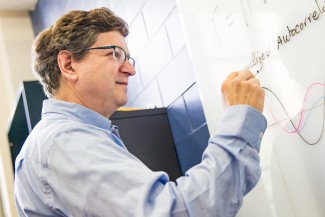 Professor of electrical and computer engineering Bernard Lesieutre and his collaborators are creating a tool to monitor stability of the electric grid and notify control operators of potential problems. Chelsea Mamott

We rely on a stable national electric grid to keep power flowing reliably in homes, businesses and factories across the country. But a sudden change in supply or demand—such as from a lightning strike, malfunctioning power plant or heat wave—can disrupt normal patterns of power flow. In some cases, those disruptions may trigger oscillations—repetitive, feedback-driven cycles—that can destabilize the grid and lead to cascading outages and blackouts.

“There are natural modes of oscillation across the grid, where if something happens in one place, it bounces around,” says Bernard Lesieutre, a professor of electrical and computer engineering at the University of Wisconsin–Madison. He and his colleagues are studying patterns of activity across the grid to learn how disruptions propagate and affect overall stability. With funding from a Department of Defense Advanced Research Projects Agency-Energy (ARPA-E) award, they are creating a tool to monitor grid stability and notify control operators of potential problems.

And in a system as large as the U.S. national grid, things can—and do—go wrong, frequently. “On a continental scale, things happen all the time,” says Lesieutre. “A transmission line will go out, or a generator will go offline for some reason. The probability of any one of these events happening is pretty small, but the chance that something will happen on any given day is pretty high.”

Most oscillations damp out, or return to normal, without triggering bigger problems. In other cases, however, oscillations can persist and push the system closer to an unstable state.

Synchrophaser technology enables identification of patterns of activity in the electric grid such as oscillations that can indicate vulnerability to potential problems. Lightly damped oscillations show the system returning to a normal state while persistent oscillations can push the system toward an unstable state prone to disruption.

Lesieutre and his collaborators at Washington State University and Electric Power Group, a company in southern California, want to better understand what leads some events to damp out and others to persist or even escalate to destabilize the grid. They are particularly interested in “low-damping” situations, when oscillations persist in the grid rather than damping out. Low damping does not necessarily signal an imminent problem, he says, but rather that the system might be more vulnerable to instability if a disruptive event were to occur during that time.

"We want to look at the system before these events happen and try to determine how damped the oscillations would be if there was a big disturbance,” Lesieutre explains. “We're trying to monitor that in real time, before an event happens, so we can alert operators to do something about it.”

The team is using a novel mathematical approach that looks for patterns in power fluctuations in the grid under ambient conditions. From that analysis, they calculate a new metric that they call the persistence measure, which refers to how long a disturbance to the system might linger before stabilizing.

“It’s sort of a ‘what if?’ response,” Lesieutre says. “If something happened under these conditions, how would the system respond?”

High persistence states can be worrisome, he says, because a lingering instability is more likely to lead to problems. Low persistence, on the other hand, indicates that the system will return to normal more quickly.

Finding such patterns in noisy grid data is challenging, however. The team‘s analysis was made possible by synchrophasor technology, which synchronizes voltage and frequency measurements in the grid from multiple geographic locations using GPS. That synchronization makes it possible to identify coordinated changes triggered by some anomaly in the system.

They are now using the persistence measure to create an online monitoring tool to identify such periods of potential grid vulnerability. Ultimately, Lesieutre hopes, it will be implemented within the power industry, to alert grid operators to these types of disturbances.

The second part of the project aims to guide decision-making, he adds. “Once we detect something, we want to be able to suggest possible mitigating actions to anticipate and prevent any problems.”

That’s part of what makes the industry collaboration so valuable, he says. With Electric Power Group, the team is able to test the tool on real grid data and ensure they are creating something that will be useful for control center operators.

In the process, they are learning more about the behavior of the grid as well. For example, their persistence measure has detected a type of event characterized by short bursts of undamped oscillations that last for a few minutes, then dissipate. Lesieutre terms these bursts “forced oscillations,” likely driven by some component in the grid—probably at a power plant or control system—that is faulty and oscillating on its own. Now the team is expanding its research to analyze these bursts, which seem to occur even more frequently than low-damping conditions.

They are also developing a method to localize the likely origin of a forced oscillation or other problem, which would allow them to alert power plants or control centers.

Even seemingly small things can show up in the synchrophasor data. The researchers were able to track one example back to a hydroplant with a malfunctioning valve. “Once you start measuring things, you never know what you're going to see,” says Lesieutre.

The ability to monitor grid stability will become even more important as technology changes, he says. The rise in distributed energy production—such as from solar and other renewables—is shifting patterns of power flow in the grid. The increasing use of energy-efficient power electronics, which place variable demand based on fluctuations in the grid, could also contribute to greater grid instability.

Once in place, the tool should help detect small problems before they lead to big ones. “The end goal is to better ensure the reliability of the grid and prevent blackouts,” says Lesieutre. “End users probably never think about these things. And they shouldn't have to, if we do our job right.”