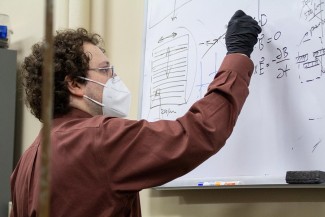 "I want to show you a mineral,” says Mikhail Kats.

The University of Wisconsin–Madison Jack St. Clair Kilby Associate Professor of Electrical and Computer Engineering points to a likeness of Bucky Badger – actually two Buckys – appearing through a translucent crystal. The crystal resting in front of a photo of the singular mascot is responsible for the UW–Madison icon’s duplication in the graphic, and was used as an example by Kats and a team of photonics experts to find something that doubles images even better, a material called barium titanium sulfide.

Light moves at different speeds throughout the stone depending on the polarization, or direction along which the electric field is pointing. And while there are plenty of geological specimens that cause double vision, barium titanium sulfide does it in the mid-infrared at almost 10 times higher than any other known Earthly solid.

“This work is an example of how characterizing optical materials is foundational to discovery,” Kats explains, describing his efforts to build up extensive capability for optical measurement. “If you look closely enough at new materials, interesting things almost inevitably fall out.”

The character of light

Imagine you are standing under an evergreen tree in a forest. A glint of light from the sun catches your eye as it shines onto your skin. In the moment you perceive that warmth, you are performing a rudimentary thermal emission measurement, the very kind Kats executes in his lab, albeit with more sophisticated machinery.

The scientific law behind these observations – that light and heat are emitted by an object in the same wavelengths that they are absorbed – has been around since the mid 19th Century, but the field of optics, or how energy interacts with the mass, is still developing.

Kats and his team measure thermal emission via a technique called “Fourier-transform infrared spectroscopy”, that captures the intensity of light waves as a function of frequency over a broad range of the electromagnetic spectrum. Kats’s group found a way to reduce the interference of other sources of energy by modeling various physical processes in the instrument, while making substantial improvements in analyzing their readings.

Another Kats finding plays with a simple notion of thermodynamics: As objects heat up, they usually let off more heat. But some substances actually do the reverse when they reach a certain temperature. Together with colleagues at Purdue and elsewhere, the Kats Lab developed a thin coating based on a material called samarium nickel oxide that appears cool despite being heated to a certain point. This invention essentially decouples temperature and thermal radiation within a certain temperature range, giving it potential applications in camouflage, insulation, and infrared camera technology.

Kats and his team detect thermal radiation with a mid-infrared system to determine differences between expected and measured thermal emissions of objects.

But what about things too difficult to measure up close or too hot to handle in the first place? Kats has a solution for that, too: remote sensing of temperature beneath the surface of materials. While ordinary infrared cameras report surface temperatures, Kats developed a new technique that can peer inside certain materials by combining thermal-radiation spectroscopy and a sophisticated algorithm to infer internal temperatures based on the measured spectra.

Kats is excited about the possibility to explore the inside of advanced molten salt nuclear reactors, where temperatures can rise above 1000° C. “Thermal radiation actually becomes a big contribution to the heat transfer in these reactors,” he says.

There’s a really broad spectrum of things light touches, so if I find something compelling, like solar energy or imaging for a certain type of skin cancer, there’s a pretty good chance I can satisfy my curiosity and go into it.

His breakthroughs in optics and thermal emission measurements have earned Kats accolades, including the National Science Foundation (NSF) CAREER award, and selections to the Forbes “30 Under 30” and ASEE Prism’s “20 Under 40” lists. Yet, he’s driven by the opportunity to accelerate curiosity and exploration by sharing his process – and his data – with others in his field.

In 1972, two physics professors at Dartmouth College in Hanover, NH, published what Kats describes as relatively mundane-seeming research about the optical properties of gold, silver, and copper. “It’s good and useful research, but there was no striking or unexpected result or killer application,” says Kats of the information presented.

What lies beneath: New method measures temperature within 3D objects

In a paper published in ACS Photonics in March 2020, Mikhail Kats and his collaborators reported a new technique called depth thermography that makes it possible to determine a 3D temperature profile within certain materials.

However, in addition to plotting their results, the scientists included a large, detailed table with all of their data—designed so that anyone could easily incorporate the dataset into their calculations.

The paper itself now has eighteen thousand citations, making it one of the most cited scientific publications in the field and, according to Kats, helped kickstart the modern sub-fields of nano optics and plasmonics. “Because these scientists decided to do a very nice, comprehensive study and shared all of their data, a generation of discovery was enabled,” says Kats.

Fast forward to Kats’ 2019 publication on the optical properties of vanadium dioxide, a phase-transition material which Kats has used in many of his works on engineering thermal radiation and infrared devices. Included are tables of data in an easy-to-use format, tabulating optical properties for this material deposited in a variety of ways. It’s a lesson in detail, but Kats cheerfully calls it something else: tediousness. “Datasets of optical properties are often as important as any device application, even if the data itself is considered an afterthought,” he says.

As some researchers might become more specialized as they traverse the academic landscape, Kats believes his passion for learning and growing the field of optics gives him the freedom to turn on a dime. “There’s a really broad spectrum of things light touches,” Kats observes. “So if I find something compelling, like solar energy or imaging for a certain type of skin cancer, there’s a pretty good chance I can satisfy my curiosity and go into it.” 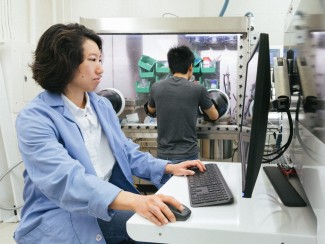 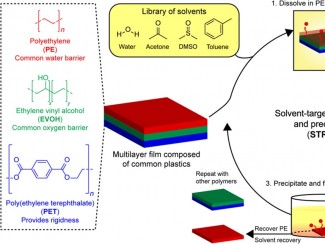 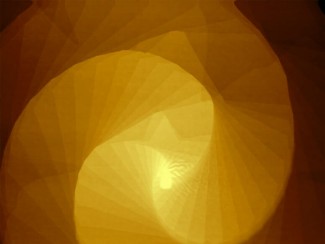 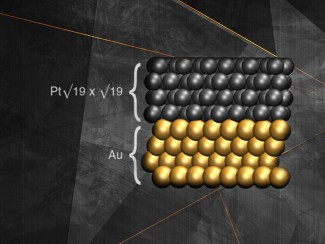