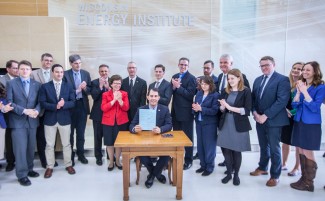 WEI is also home to a number of researchers working across traditional academic boundaries to investigate the potential impacts—both scientific and social—of next-generation nuclear energy systems.

WEI director and distinguished professor of engineering at UW–Madison Michael Corradini added, “It is fitting that a law allowing for the exploration of carbon-neutral energy solutions has been signed at UW-Madison’s hub of energy research, where our discoveries truly benefit the people of Wisconsin.”