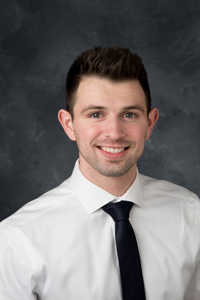 Kyle Kinney
Department of Microbiology and Immunology
University of Iowa

Staphylococcus aureus is the leading cause of infective endocarditis (IE) in the United States, causing an aggressive, tissue destructive form of the disease largely unseen with other organisms as causative agents. We have previously shown the importance of superantigens (SAgs) in the establishment and overall disease severity in staphylococcal IE. It is becoming more established that SAgs interact with the host in more ways than previously thought. These interactions are superantigenic independent and involve a variety of cell types that can promote disease pathogenesis. Currently, the understanding of the SAg biological functions that promote the pathogenesis of IE is not understood. Here we addressed the mechanism by which SAgs contribute to IE pathogenesis by mutating known superantigenic dependent binding sites on staphylococcal enterotoxin C (SEC) and complemented these toxoids in an IE deficient strain in the rabbit model of IE. Our investigations revealed that SEC is required for IE progression, though not dependent on superantigenicity. This suggests that SEC has a previously unknown function important for disease causation. Given these findings, we looked at SEC interactions with the endothelium because of the importance of the endothelium during IE. Our models show that SEC can interact with and impair the normal biological functions of the endothelium. This point towards a possible mechanism of SEC endothelial interactions in the establishment of IE. These findings provide insights into the underlying molecular mechanisms of SAg involvement in S. aureus IE. Importantly, it provides further evidence for superantigenic independent effects being important for staphylococcal pathogenesis and for the first time shows that SEC is a multi-functional toxin.