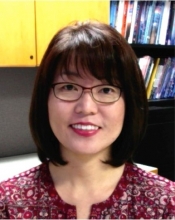 In this Sustainable Energy Seminar, Kyoung-Shin Choi, Professor of Chemistry, will discuss new materials and devices that could reduce the energy requirements of desalination and act as a form of energy storage.

The steady growth in human population and rapid development of industry and agriculture are causing access to fresh water to become an increasingly critical issue. Considering the abundance of seawater on Earth, identifying novel desalination technologies that can complement or outperform existing seawater desalination technologies is imperative. Recently, we discovered that Bi can serve as an effective and practical Cl-storage electrode. This discovery has opened up new possibilities to construct electrochemical desalination cells which can effectively overcome the current critical limitations of seawater desalination. For example, Bi as a Cl-storage electrode can be coupled with a Na-storage electrode to construct desalination batteries where the charging and discharging processes are coupled with the storage and release processes of Na and Cl ions. Since the energy consumed during the charging cycle is at least partially recovered during the discharging cycle, desalination batteries have the potential to achieve cost-efficient desalination with a significantly lower energy requirement than conventional desalination systems. Furthermore, desalination batteries, which remove Na and Cl ions via ion-specific electrode reactions do not require the use of membrane and can achieve membrane-free desalination, which eliminates processes and costs associated with membrane fouling and replacement. In this presentation, we will discuss the operating principles and performances of various new electrochemical desalination devices enabled by the use of Bi as a Cl-storage electrode.